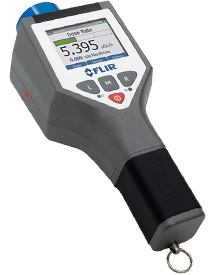 LAURUS Systems offers the Teledyne FLIR identiFINDER R400.  Formerly the ICX identiFINDER2, Fieldspec by Target, it is the most widely deployed radioisotope identification device, RIID in the world.   At half the size and weight of competitive radioisotope identification devices, RIID’s, the R400 helps operators feel comfortable using the instrument. The Teledyne FLIR Systems (ICx Technologies) identiFINDER R400 is a logical next generation instrument based on the original identiFINDER.  With 15,000+ identiFINDERs deployed worldwide, inputs on how to improve this already excellent instrument have been few but valuable. The identiFINDER R400 is the result of taking these inputs and suggestions and adding them to the original instrument. The identiFINDER R400 uses the same algorithms that have proved themselves over many years of superb operation. The housing and three button, one hand operation is also the same.

Operators use the handheld R400 to detect, quickly locate, measure, and identify the source of radioactive material. Like other identiFINDER R-series products, the R400 contains on-board Bluetooth, web server, and GPS technologies and produces rapid visible, audible, and tactile alerts that expedite response measures. The common operating interface reduces training time and costs, while increasing operator confidence and inter-operability between agencies using FLIR products. The identiFINDER R400 provides operators the ideal balance of size and weight for a wide variety of monitoring scenarios including all-purpose surveying, emergency response, and environmental monitoring. With over 20,000 devices deployed globally, it is the most trusted RIID in the world.