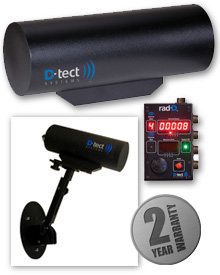 The Rad-D is a fixed-position radiation detector that is used to monitor doorways, driveways, or loading docks. It can inspect packages or luggage on conveyor belts; and it can be integrated with an X-ray machine or a metal detector to increase the kinds of dangers detected. The Rad-D can also be easily connected to an existing security system – to add radiation to the other types of alarms. The Rad-D is small. It can be attached to walls, light poles, convey-or belts, or X-ray machines. And because it is small, it doesn’t affect the how of vehicles or pedestrians under inspection. Other, similar devices need large, fixed areas and concrete footings to mount their systems and require traffic (vehicles or people) to be forced through a fixed inspection corridor.

A Rad-D system can include up to four detectors – operating simultaneously, each up to 150’ away from the display electronics. The Rad-D is designed to integrate into existing security networks, using either a serial communications link or a Bluetooth wireless link that can communicate with a PC up to 300 feet away. With four detectors, an operator can monitor four different doorways (or driveways, or conveyor belts, etc.) anywhere in your facility. When the Rad-D alarms, it can trigger active responses such as blockades or halting conveyor belt.